Check back every week for new ways to experience and stay connected with your favorite Celebrity Series artists!

Save the date for Aristides Rivas and Meena Malik 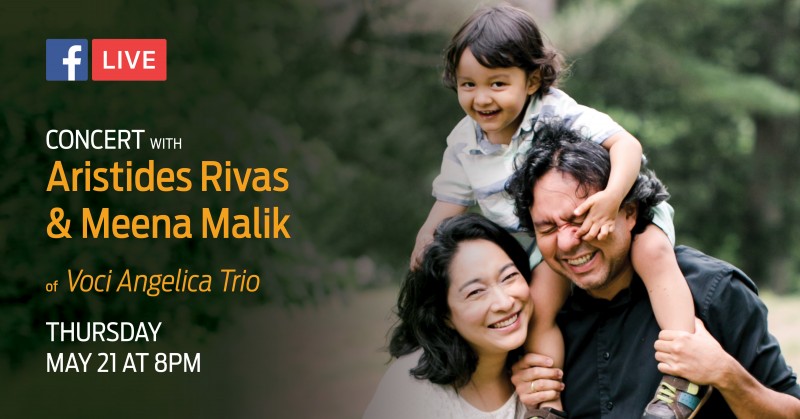 Blending the genres of world folk and classical music, Aristides Rivas and Meena Malik from Neighborhood Arts ensemble Voci Angelica, create an ambitious blend of cultures, reinvigorating traditional songs for contemporary audiences. Vocal harmonies elegantly intertwine with lush cello lines to create a musical fusion that transcends political and geographic borders. Join their Facebook Live concert this Thursday, May 21 at 8 pm ET. RSVP to the event to get a reminder!

Tune in this Thursday at 8:00 pm to our Facebook page.

I’m sometimes asked what my favorite type of music is. It’s difficult for me to answer, so I usually just list people I like. The list often changes, but Maria Schneider is always on it. She has influenced my musical sensibilities more than most, and I’m always willing to gab about how wonderful she is. In light of this, let me tell you how wonderful she is.

Schneider began her career studying with two jazz greats: Gil Evans, for whom she worked as a copywriter and ghostwriter, and Bob Brookmeyer, with whom she studied privately. The voices of both of these composers loom large in her early work, and the pieces on her first album, Evanescence, often sound like one or the other of her mentors. What is striking to me about her early music is how dark it is, and how reliant it is on texture rather than melody. As her sound matured and she became more comfortable with her own sensibilities, strong melodies guided the form of the compositions and prettiness shone through. This is the sound I fell in love with, the sound she first explored in her piece “Hang Gliding.” She would later devote her masterpieces Concert in the Garden, Sky Blue, and The Thompson Fields to this unabashedly beautiful sound.

I’ve read reviews of Schneider’s music that mention a Broadway-like element to her writing, probably because her melodies are catchy. The name thrown out for analogy is usually Stephen Sondheim, and although the intricacy of his music does have a relationship to hers, Schneider’s melodies remind me more of Charles Strouse. On the surface, Strouse’s music feels easy to swallow, especially now that much of it is so famous (he wrote the score to the musical Annie). In reality, his melodies are carefully crafted and extremely difficult to sing. Like Schneider’s, Strouse’s melodies cover a wide vocal range, with constantly shifting directions and intricate long-form structures. Still, they feel hummable (see “A Lot Of Livin’ To Do” from Bye Bye Birdie, “Tomorrow” from Annie, “Brand New World” from Rags). What used to be called light entertainment is often just as sophisticated in conception as more overtly “artistic” music. This is what Maria Schneider has taught me. Her gift is to write difficult music that feels effortless to the listener, and her lesson is that difficult music can also be pretty. It seems like a silly and naive lesson, but it’s one that I think is worth learning.

Recently, there seems to have been a shift in her composing, and it’s wonderful to hear. While collaborating with David Bowie on their Grammy-winning “Sue (Or In A Season Of Crime),” her music again revealed a darkness, but without betraying her love of strong melody. She has claimed that this sensibility is what characterizes her newest project, Data Lords. As we approach her concert with Celebrity Series in March, I can’t wait to hear what she will bring to the world with this project. Though I’m sure it is dark, I’m also sure it will be beautiful.

Jean Appolon, one of our Neighborhood Arts dance artists, led a Facebook Live movement workshop last week. In addition to being the co-founder and Artistic Director of Jean Appolon Expressions, Jean is a successful choreographer and master teacher based in Boston and Port-au-Prince, Haiti. Watch his power workout on Facebook now (no account required).